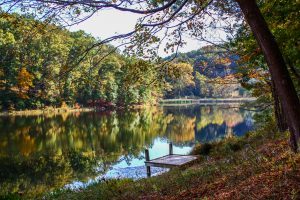 I look at a picture of mirror reflections from time to time. I like some of the scenes taken near the edge of a body of water. It really makes the mind play tricks. The reflected picture over water showing you everything that is on the banks. The real reflected by the unreal, the unreal reflected by the real. So in your mind’s eye, you see two very perfect images. Are the images you see both real?

Pyrite is fool’s gold. Many people who are familiar with it and have held it in their hand would find it looking very much like gold. It sparkles and is heavy in mass much like gold. It can be mistaken for gold as it appears within gold seams. Many amateur prospectors were fooled by it during the gold rushes, I am sure after all the mining of the mineral by mistake must have cost them fortunes.

I can say that sometimes reality hurts, sometimes it is not as it seems. It, in fact, can fool you. What you think is the reality comes to be only a reflection of what you perceive as real. This mistake happens based on what you think, versus the real facts.

If we look back at the picture of the bank of a lake, the water reflects back to you an image of what is on the bank, real enough you say to be identified by the mind’s eye as reality. It is exactly the same. But, no it is not. If you were to touch the water the reflection would distort and no longer give a clear perfect reflection. The real is what you can touch and will not change and distort. Those trees on the bank are very real in their physical appearance. You can apply all your senses for proof. You can walk upon the bank and touch the bark of the trees; you can hear the wind blow through its branches. This cannot be done with using all your senses upon the reflection. Sight without touch can really fool you. One should not just rely on one sense for proof.

I probably could say art is a reflective process. An artist will try to capture the reality that the mind’s eye sees and puts it into a photograph or paints it upon a canvas, or makes it a movie on film. Creativity can take the unreal and make it seem real. But, remember things created from the reflective process can be made real only if constructed from real materials.

It was always a reflection of the dream that humans could one day fly. That dream was written about, found in drawings throughout history, then the unreal became real. Plans were drawn, the product built and tested, and humans flew, and continue to improve upon flight with the creative design process.

I continue to use my senses in the real world. I like the idea of capturing what I dream and writing it on paper as coming from some unreality in my mind. If it were not for my dream or thought, nothing would become of it. When I put the dream or thought to test of reality by physical construction, so then I can see it, but also touch, hear, and taste it, then it becomes something very real.

I like that idea that you can think of something, then design it on paper, then create that something you thought of, finally constructing it. Then you bring the idea to reality.

In essence, creating something out of nothing.

John Larabee received his Bachelor of Science in Elementary Education in 1973 and his Master Degree in Mathematics and Science Education in 1983, both from Ohio University. He began teaching in 1973 and finished 35 years of teaching in elementary and Junior High English, Science, and Mathematics prior to his retirement in 2008. During his years in the classroom, John developed innovative ways to assist student learning through the development of creative, interactive science units and attention to each student's unique learning style. View all posts by John Larabee