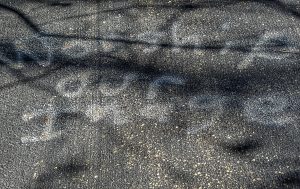 For the past three years, I have passed these words scrawled into the blacktop on the Newark rail trail. I hike this trail frequently and often ponder the author’s intent in this choice of words. Always visible, these three words have survived several winters, as if to protest removal with words too stubborn to submit to change.  Does the author revisit this place at the first sign of warm weather to reinforce a statement apparently important enough to remain for years? What exactly does it mean to worship our image?

The word “worship” is common to religious traditions, defined by the provision of reverence to an intended deity. To worship is to place in an exalted position, above oneself. Therefore, on the surface, to worship our image, could well smack of arrogance implying the lofty placement of self above the welfare of everyone and everything else.

I could dismiss the statement as ill-informed, but I pause at this statement every single hike. The statement gnaws at my brain, inviting me to consider other possibilities implied by the statement in search of a deeper meaning. What is the difference between the self and an image of self? Does the use of the corporate “our” in the statement denote the author’s intent to be inclusive, extending a privileged position to all humankind or even all living-kind? Do these distinctions make any real difference?

Perhaps any indictment is short-sighted and ill-advised. Perhaps I think too much. Perhaps, I should hike a different trail.

Or perhaps, a different and more positive meaning can be found beneath the surface of this statement.

Beyond the religious connotations, “honor” is but one alternate meaning for the word “worship.” And while the word “image” could be used to describe a physical object, such as a photograph or statue, image, in a broader sense, could refer to a reflection or extension of self. While, I will never know the author’s true intent, considering the possibility of worship and image from this broader context is intriguing. What if you and I truly honor the person we are and the life we have been given? What image would be produced if we truly live the gifts we’ve been given from the best self we can cultivate?

Jane Pauley did a couple of segments on today’s Sunday Morning show that spoke to this idea of honoring our gifts. One segment featured comedians that had blazed the early television trail leaving a legacy for other comedians to follow. A second segment featured the iconic Beatle’s Sergeant Pepper’s Lonely Heart Club’s band album and the way in which the music from this album pushed the limits of studio technology, sound and even art in ways unheard of in the industry.

In-between days of rain, I took a hike on the one sunny day offered this week. I had to see if the statement was still visible on the trail. Much like the artist’s legacy, I found it, once again, subtle, but still speaking from the same place it has occupied in year’s past.

I doubt any of the artists featured on this morning’s broadcast foresaw or planned for the impact their work might inspire. Like ripples in a vast sea, sometimes honoring our gifts by nurturing and sharing them with the greater world, reflects into the world in unimaginable ways. How would our world change if each of us decided to live through the gifts we’ve each been given? Could the reflection of each of our best selves change our world from the inside out?

That’s one image that could truly make a lasting statement.

Debra Larabee is a nurse, writer, photographer and lifestyle educator. She received her diploma in nursing in 1981 from Mount Carmel School of Nursing and a Bachelor of Science in Nursing in1990 from Capital University. Debra completed post-graduate training in distance education from the Univerity of Maryland and has dedicated her professional life to assisting others in their search for a healthier life. View all posts by Debra Larabee