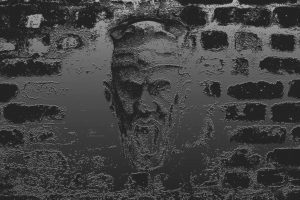 To live a pirate and a smuggler’s life meant a dangerous path to eventual doom.  A constant fight with other pirates and smugglers along with the crown seeking your head.  All this for a hoard of treasure that had to be hidden and the secret of its hiding death to all who would choose to seek it.

There is a garden in Charleston South Carolina that is in the courtyard of an old Inn.  It is said to have been visited by many pirates who would meet and make deals with what they smuggled from their attacks upon the merchant ships. It is said Blackbeard frequented the inn to do business with other pirates and smugglers.

The garden itself is enclosed with a fountain with a pirate’s face that is green from age and stares from a fountain. It is a warning to all of those that might be near what will happen to you if you give up any secrets you may hear. The pain shows up on the image of the pirate trapped in the bricked-in fountain, that he be an example to all who enter the courtyard. The secrets must be kept avoiding being trapped in the wall for eternity with the pirate’s curse.

All ye who enter here, speak not of the secrets ye hear.

Let no coward tell who be here by name. Let no blood be drawn here.

We barter and make plans for the sale of booty for profit.

Here we be brothers’ smugglers and pirates all.

If ye tell of treasures and secrets, a pirate’s curse be upon ye,

For ye will be trapped in the garden wall for eternity.

John Larabee received his Bachelor of Science in Elementary Education in 1973 and his Master Degree in Mathematics and Science Education in 1983, both from Ohio University. He began teaching in 1973 and finished 35 years of teaching in elementary and Junior High English, Science, and Mathematics prior to his retirement in 2008. During his years in the classroom, John developed innovative ways to assist student learning through the development of creative, interactive science units and attention to each student's unique learning style. View all posts by John Larabee